The Journey to Bangkok

I have officially arrived in Thailand! I am currently writing this from the balcony of our quaint little room in Sivarin Guesthouse located in the Banglamphu district of Bangkok, by the river. We haven't explored the city yet obviously because it is 2:30 in the morning... but I can't wait to check out the sights tomorrow. I should be tired right now, but the excitement of being in a new place is keeping me awake so I figured why not write a tiny entry about my journey so far!
The day started out early, I woke up about 20 times between 4 and 5 am in Charlottesville and then finally rolled out of bed at 5:20 to make last minute preparations. Had an omelete cooked by dad (last American home-cooked meal for a while) and then we hit the road at 6:30 am. It was raining pretty steadily which I deemed appropriate considering we'd be seeing a lot of rain in Thailand.
Arrived in Dulles around 9:30, and was thankful we left earlier than originally planned due to hitting traffic on Rt 66 (of course) as we approached the Washington Area. It was still raining when we got there, and Mom and Dad walked me to the ticketing office and were there with me while I checked my bag. Love em!
Soon it was time to say good bye. I snagged a few pictures, gave some big hugs... and I was off to battle my way through security. My flight left at 12:25 pm so I had plenty of time to chill, and relax before undertaking the longest flight of my life. It was 12 hours and 45 minutes to Tokyo... then after a 3 hour lay over, it was 6 more hours to Bangkok. Grand total of 23 hours of traveling! 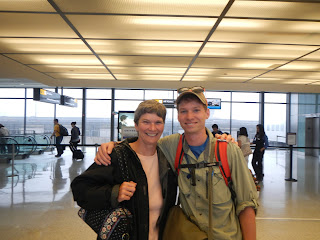 The rest of it went pretty smoothly, boarded on time... sat between two business professional younger men (one was a coach of some sort and the other was a hair stylist... craziness) and sat back and enjoyed the ride. Watched a few in-flight movies, read some, slept a lot, and then we were there! Got off in Tokyo at approximately 2 pm their time (the flight was an hour early) on the 4th.. Yay 'Merica! Went through security again there, and made it to my terminal for the last leg of the flight and took a nap until it was time to board. Lots of sleeping!
Got woken up by a kind person who wanted to make sure I didn't miss my flight by being passed out on the floor of the terminal (Thank you!) and boarded the plane for Bangkok around 5:30 pm Japan time. The 6 hour flight to Bangkok was a cinch, slept some more... watched some Parks and Rec, ate and then we were there! This flight was also an hour early... so we arrived about 10:15 pm.
I made it through the airport, checked in through immigration, grabbed my baggage and met my fellow frog researcher Michael at the "Meeting Point." He was relieved to see me, and I him! We were lucky in that our flights aligned in times by only an hour difference just by chance. He booked the room at the guesthouse earlier and I had told him I'd stay there with him to help cut the cost and so that I would have a traveling buddy. It's working out great so far! I exchanged some money (feeling super rich here!) and then we caught a Taxi into the city.
The Taxi ride was fairly long, since the airport is pretty far out... about 20 minutes, so Mike and I had a chance to catch up about our backgrounds and expectations for the trip. Pumped to be spending some time with this guy! He's done research in the past on Great White Sharks in South Africa which is totally cool and is an avid diver, so I'm looking forward to exploring some of the islands and beaches with him once the field season is done. The taxi ride only cost about $10... we found the place successfully (thank God) and since we had already made a reservation we were able to check in late.
After a moment of confusion while not finding anyone around, we eventually realized we needed to ring the bell... and then we were slowly greeted by the employee we woke up. He scanned our passports and showed us to the room... which is totally awesome. So far haven't had to know any Thai but I plan to try to learn a few useful phrases tomorrow while we're exploring. Thankfully people seem to know English enough to tolerate our ignorance.

It even came complete with a gecko on the wall!
We explored, talked some more, and unpacked a bit. The weather here is warm and very humid. Feels like you're constantly sticky, but thankfully we have fans and windows that can be opened so it actually feels really nice with a slight breeze. I marveled at how many books Mike brought for a bit... enough for months.. and then we chilled on the balcony for a while and talked about our plans for tomorrow.
I took a shower, and relaxed... e-mailed the folks and now as soon as I wrap this up I'm heading to bed. Hopefully I won't be too dead tomorrow to make a full day out of sight seeing. There will be plenty of time to sleep while we're in the jungle! Besides, I need to work on getting on the nocturnal schedule anyhow considering the nature of our work will have us active at this time. Well, blee-blee-blee... That's all Folks!
Peace out!
Posted by Unknown at 4:12 PM