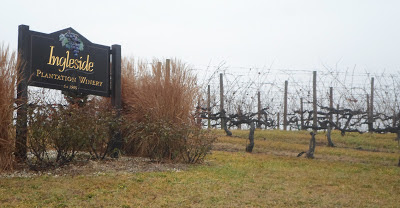 I'd like to interrupt this irregularly scheduled program to bring you all back to a cold, rainy day in January... when 909 took a "company field trip" to tour Ingleside Winery. But first I'll take you back a bit further... to explain why we were there. In November 2012, 909 made the decision to shift our wine list towards selling only Virginia Wines, in an effort to support the local economy and increase awareness of how many delightful wines our region has to offer. We are very proud of the 909 Wine List that has blossomed as a result of this switch, but to get there took many months of research, tastings, and even a winery tour. Chris Flemer, head of marketing and sales for Ingleside, had come to 909 to allow me and +Brian Hyland (owner of 909) to taste some of their wines, and after the tasting he invited us to bring the entire staff to come tour the vineyard.